1 Cor 11:27-34 is a bit awkward to translate into the English.  Unfortunately, this passage, especially as rendered in English, has been misunderstood in a number of ways.

One misunderstanding is that there is some sort of curse of sickness and/or death if you do not perform the ceremony of the Lord's Supper correctly.

Another misunderstanding is that you have to "get right with God," or else "get right with your brother," or both, before you can partake, or else you will be cursed with sickness and/or death.

Jesus instituted the "Lord's Supper" on the evening before his death.  The accounts of this are in the gospels.  He specified what it was for, and that it was to "recognize" and "remember."  Those are the two key words: recognize and remember.

"20 Therefore when you meet together, it is not to eat the Lord's Supper, 21 for in your eating each one takes his own supper first; and one is hungry and another is drunk.  22 What!  Do you not have houses in which to eat and drink?  Or do you despise the church of God and shame those who have nothing?  What shall I say to you?  Shall I praise you?  In this I will not praise you." (NASB'95)

It should be clear from the above that the Corinthians are not "remembering" or "recognizing" the body and blood of the Lord, given the above behavior.

If you believe that.

On the other hand, it is easy to comment on being saved from our afflictions, which would cause some amount of sickness and death if we are not saved from them.  So he does just that, using that evidence of sickness and death as a case in point to show that they are not recognizing the body of Jesus that was broken for them, that they would live healed and healthy lives.

In 1 Cor 11:27-34, it is important to look into the meanings of the original words used, because they are awkward in English translation. In the following interlinear graphic, I have boxed some key words in different colors, which words are often misunderstood, often even mistranslated. 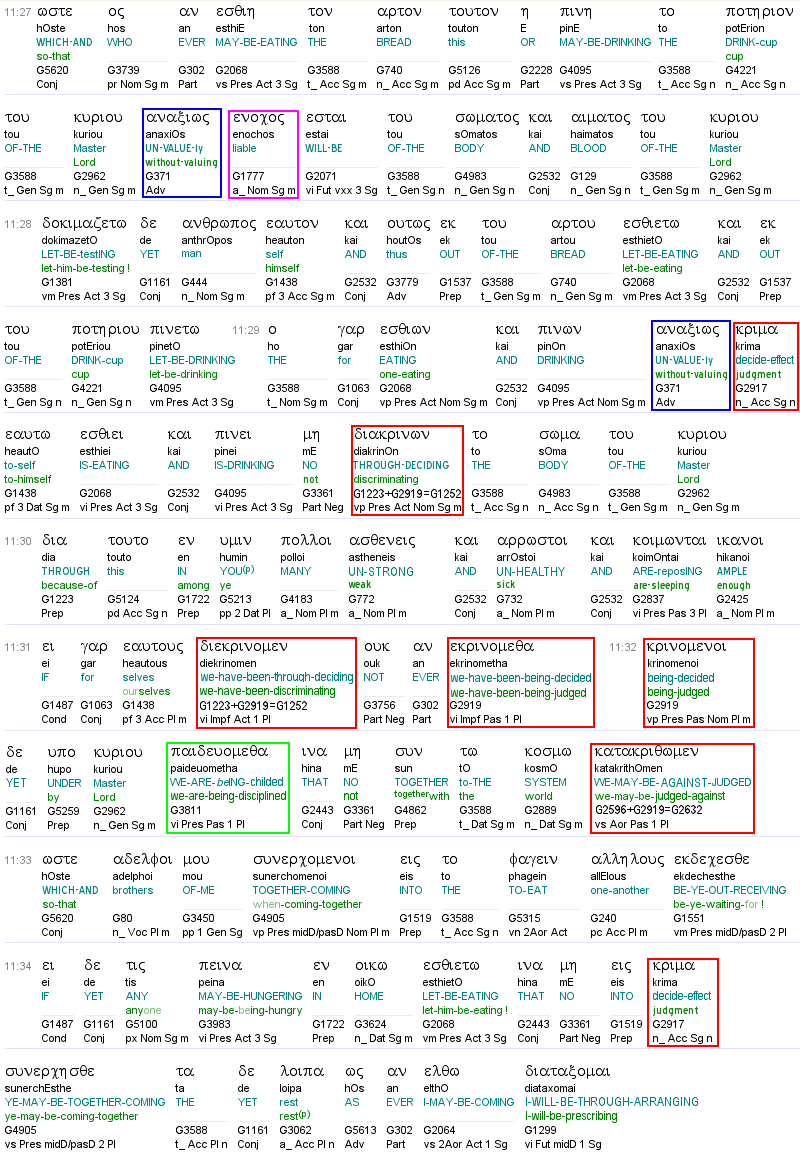 First, in the blue boxes is the word αναξιως.  This is an adverb, not an adjective form, of describing something done "without value," but we do not have a corresponding English adverb ("value-ly").  As an adverb, it modifies the verbs "eating" and "drinking."  As an adverb, it describes "how" they are eating and drinking.  That is just grammar.  It is not an adjective, which would modify a noun or pronoun, such as the pronoun "whoever."  It does not describe anything about the "whoever" person.  Remember verse 21:  "...one is hungry, another is drunk..." That is "how" they were partaking of the Lord's Supper.  "Hungry" is an adjective that describes them.  "Drunk" is an adjective that describes them.  "Without value" is "how" they were partaking of it, an adverb.  It is not talking about the person's "worth," "sin in their lives," "ought against a brother," or anything else about the person.  It is talking about the "worth" of the way that they partake of the Lord's Supper and, by identification, the "worth" of the body and blood of Jesus, which they obviously don't "value," since "one is hungry, another is drunk."

Next, there are seven words boxed in red.  They are all variations of the same root word.  The base is the word κρινω (the verb, "decide") and related forms that begin with κρι__, which simply have to do with making a decision, a judgment concerning some matter, any matter.  None of these words speak of "condemnation," but rather simply making judgments, and consequences for those choices.

In the second and third red boxes is δια-κριν__, which has the preposition δια, which means "through," as a prefix to the word.  This makes it "through-decide," which means to deliberate "through" something thoroughly before making a decision about it.

In the fourth and fifth red boxes is _κριν__ which is simply to decide, to make a judgment about something.

Finally, in the green box is the word παιδευομεθα, which is simply the verb form of "child," except that we don't have such a word in English.  If you "child" someone, then you are treating that person as if he were a child.  In many cases in the Bible, it refers to nothing more than being "trained" (Acts 7:22, 22:3, 2 Tim 2:25, Tit 2:11).  One of the things that you do with a child is discipline and chasten the child, for the child's own good.  You don't condemn the child, obviously, on account of the child acting childish.

The above should clear up the word confusion.  As a result, we can re-read this in a more logical and reasonable light:

Verse 28 points out that you ought to examine yourself accordingly.

Verse 29 says that there will be evident an "effect," if you consider it of no value, because you did not discriminate the body.

Verse 30 says that this effect is that many are weak and sick, and some have died.

Verse 31 says that if we have been discriminating, then we have not been being judged.  Note that the verbs are in the imperfect tense, denoting an action that started in the past and did not complete, and therefore continue from that point.

Verse 33 again tells them to behave properly with regard to the Lord's Supper.

Verse 34 tells them to do things that are not of the Lord's Supper elsewhere, so that there will not be consequences as a result.

Granted that this is difficult to translate literally into proper English, let me offer my best effort, kind of half-literal, half paraphrase:

"27 So that whoever may be eating this bread or drinking the cup of the Lord without valuing [it] will be liable concerning the body and blood of the Lord.  28 Yet let him be testing [himself] and thus let [him] be eating out of the bread and let [him] be drinking out of the cup, 29 for the [one] eating and drinking without valuing [it] is eating and drinking to himself to the consequence of that decision, not discriminating the body of the Lord.  30 Through this among you many [are] weak and sick and enough are sleeping.  31 For if we have been discriminating, we have not ever been being judged.  32 Being judged yet under the Lord we are being child-trained, that we may not be judged against together with the world.  33 So therefore, my brothers, coming together to eat, be waiting for one another.  34 If yet any may be hungering, let [him] be eating at home, that you may be coming together not into the consequence of that decision.  Yet the rest I will be prescribing as when I may be coming."

Here are pointers to the various words, according to Strong's (biblical Greek) and the LSJ (classical Greek):

I grant this work to the public domain.