Question:  What does 1 Peter 3:21 say about "water baptism"?
Answer:  It says that the wicked in the days of Noah were "baptized" to death in water!

For 1 Peter 3:21, read the following interlinear very slowly and carefully: 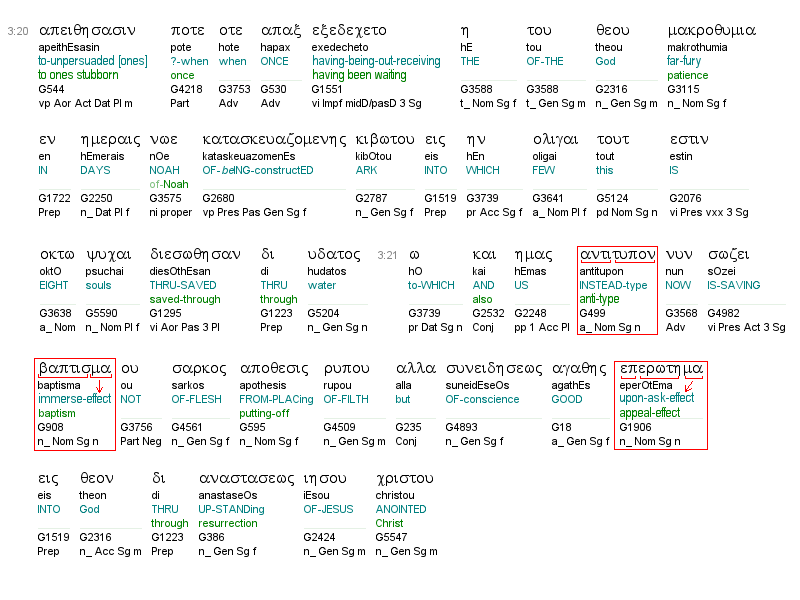 Because it is difficult to render all this into proper English, the resulting ambiguity may lead one to come to the opposite understanding of what is actually written.  That is why we have confusion and proof-texting by those who teach the error of baptismal regeneration (that water baptism is necessary for regeneration and salvation).  1 Peter 3:21 and Acts 2:38 are the two main proof-texts for those teaching this error.

The word translated "representation" (CLV) or "like-figure" (KJV) or what "symbolizes" (NIV) or what "corresponds" (ESV, NASB), or "antitype" (NKJV, YLT) is meant not to compare, but to contrast what happened in the Flood to what happens to us.  The question to ask is not how it is the same, but how is it opposite, since it is an "anti-type."

Now, let's get one thing straight: "Water" does not symbolize or represent "water."  Nor does "water" contrast "water."  So the water of the Flood cannot symbolize or contrast water in "water baptism," but some principle that is in opposition to that.

In fact, "water baptism" is not even mentioned here.  Only the water in connection with the Flood is mentioned.

So, we can forget about 1 Pet 3:21 having anything to do with what we call "water baptism."

Besides, the people who were "baptized" (i.e. immersed) in the Flood waters were the wicked who drowned and perished.  You don't want that!

So, back to the comparison.  What happened in the Flood is being contrasted to what happens to us, which is different.

Follow closely the Greek words in the actual sequence that they are written.  It is the "anti-type" [of the Flood he was just talking about] that saves us, "NOT of-flesh, putting-off of-filth..."

Stop right here a minute.  The word for "of-filth" is "rupou" which can either mean literal "filth" (dirt) or moral "filth" (depravity), just like "filth" in English does.  We should assume that it means moral filth, or depravity, not physical dirtiness because, really, who cares whether you are physically dirty, and what can that possibly have to do with salvation?

Now, go back to what happened in the Flood.  God destroyed the moral "filth" by "baptizing" (immersing, drowning) all those people to death.  This was judgment, not salvation, for those immersed.  That was God's stated intention in Gen 6:11-13, and that's what he did.

But we don't get saved by "putting off the filth of our flesh" with water.  We get saved through something else, and it isn't water baptism.  This brings us to the next key word.

This gives us the improper, but correct English rendering of "...not the placing-off of-filth but [the] ask-upon-effect of good conscience into God through [the] resurrection of Jesus Christ."  To put it more simply, the "salvation" is the "effect" of our "asking" God "in good conscience."

Next, look at the word translated "baptism." Note that it has the same -μα "-effect" suffix. So, this word is literally "immerse-effect."  This is also important to the context, because the comparison is made between the "effect" of being immersed (which was to drown the wicked to death), and the "effect" of making an "appeal" to God.

Keep in mind that God's putting off the filth of the world by means of the Flood was not a final solution. Noah and his family were saved, but the flesh, the sin nature, was still there, so sin and corruption soon happened again.  The "filth" was put off, but they managed to get dirty again!  Eventually, they all died anyway.

Likewise, trying to "put off the filth of our flesh" cannot be not a final solution, either, even if you suppose that water can do that.

The only "baptism" that 1 Pet 3:21 talks about is the "baptism" of the wicked who were drowned in the Flood.  The "effect of an appeal of a good conscience," or however you want to translate it, is not a "baptism."  It is the result of our decision and commitment to place our faith in God, like Noah did, who was not immersed in the waters of the flood.

So it is not the "baptism" (immersion) of the Flood (which was, in fact, a putting off of fleshly filth, or wickedness, by means of immersion in water), but the anti-type of that which saves us, the "effect of our appeal toward God through the resurrection of Jesus Christ."

No New Covenant form of "baptism" (immersion) is mentioned here.  Not immersion in the Holy Spirit, not immersion into the body of Christ, and certainly not the sacrament of having our bodies immersed in water.

Yet we see the principles of the New Covenant again: We don't get clean by just putting off moral filth. Something or someone else has to save us, and that is faith in God through Jesus Christ.

The "eight souls [who] were-saved-through through water" were not immersed. They weren't even sprinkled.  They didn't even get wet.  The water had nothing to do with their salvation from the judgment of the Flood.  The ark saved them, by causing them not to be immersed (baptized) in the water.  They floated on the water that immersed (baptized) the wicked to death.  They were saved in an Ark.

Here is an illustration of the "type" vs. "anti-type" principle: 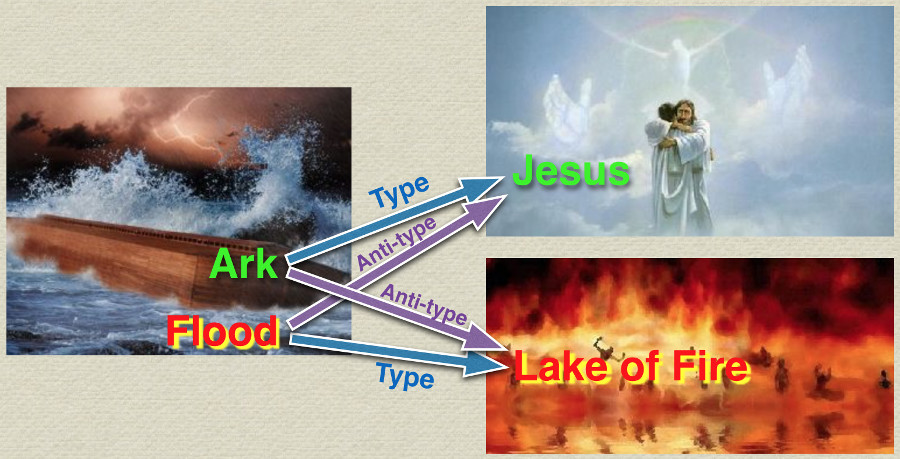 Note:  This article does not imply that the sacrament of water baptism is not important, or that it is not profound, or that it is not meaningful, or that we should not bother doing it.  This article shows, among other things, that Peter is not speaking here of anything having to do with water baptism, contrary to those who try to use it as a proof text.  At the same time, this article is not meant to tacitly promote the opposite error of "recitational regeneration," particularly by employing the so-called "sinner's prayer" to convert people.  επερωτημα is not "the sinner's prayer," either!  Water baptism is a profound demonstration of one's death, burial, and resurrection in Christ and, accordingly, is the proper thing that should be employed as a tangible act to demonstrate a person's conversion and new birth. See my article and video on this matter.

I grant this work to the public domain.